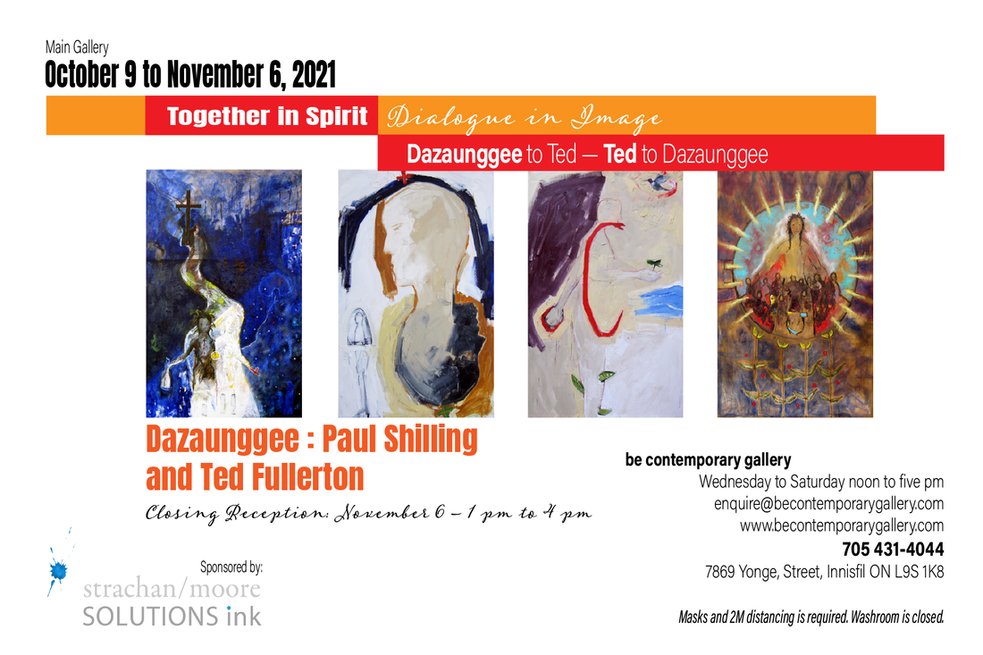 Dialogue in Image: Dazaunggee: Paul to Ted, Ted to Paul
Paul Shilling and Ted Fullerton met in the early nineties and befriended through a mutual respect for each other and their creative work within the arts. After not seeing each other for a number of years they met again by chance in the spring of 2018. Their daylong conversation on and about colonial domination and oppression was open, honest and direct. They spoke of each other’s reality growing up, their current realities and a perspective of their “truth” and shame.   As a result of that day they decided to continue the conversation visually, to create a lasting and honest statement of truth to and with each other.

At this current juncture in Canada’s history, artists Paul Shilling and Ted Fullerton’s “dialogue in image” is intended as an honest and perhaps controversial point of encounter to the current topics of original people, colonization, spirituality, aesthetic sensibilities, expropriation of Indigenous land, culture, language, identity, shame, art and stories; an ongoing exploration and declaration for reconciliation and understanding. This open and visual dialogue between the two artists is to speak truth to each other and to realign their relationship that can be shared with others. In doing this each artist created and made a visual statement in painting to the other. Neither artist was aware of what was going to be “said” visually. This process would occur as if in an open dialogue and conversation, as it did during their get-together in the spring of 2018. Each visual “statement” was exchanged without each artist previously being aware of what was going to be presented to them resulting in a reciprocal visual response by the other artist. As a result, two pairs of paintings, one by Paul the other from Ted and one by Ted and the other from Paul meet in truthful conversation and confession with each other.

Paul Shilling and Ted Fullerton are the same age and were born in the same month yet come from two very different life experiences.

Paul Shilling, Chippewa of Rama First Nation was born into an already broken circle and grew up in a time of severe cultural oppression. As the last of 13 children the Ojibway language was only spoken in hushed, hidden places in the belief this would help his/their integration into the, dominate culture. Because his familywas already separated from their original life and historical wealth, relationships with culture, land, hunting, and fishing were suppressed and convoluted, existing only on the
edges of their daily life. Mostly Paul was raised by his brother and artist Arthur Shilling, who early on championed younger children and youth in the arts. Growing up he was at the centre of Arthur’s painting as his model, muse and cook. He infused in him that their way can and will continue through creativity, not just in a formal way but in everyday life itself. This has indeed been Paul’s journey - to live in harmony with creativity in all aspects of his life. In this way painting, drum making, carving and writing all became ways for healing, to celebrate the spirit. It was an opportunity to explore and understand himself, and his place and relationship within the circle of universal creation that exists for everyone.

Ted Fullerton was born in Ottawa just after the end of the Second World War. His parents met just prior to his father being shipped overseas and they were married when he returned. The second of two children Ted grew up in Port Credit – Mississauga, Ontario – in a newly built middle class home that, at that time, extended beyond what was implied as the suburbs. His childhood and adolescent years where full of privilege and encouragement within a loving and nurturing home. As an overactive child Ted found solace alone within the woods that existed at the end of their street. Drawing and painting was introduced to him naturally at a very young age, as his mother was part of a painting group that met weekly at their home. Visual expression became a way for him to explore thoughts and feelings that reflected personal, human and social concerns even at a young age. He has never been quite sure why his concerns leaned that way at an early age but believed by being exposed to photo journalist magazines such as Life, Time and National Geographic that where subscribed to and constantly around the household allowed him to “see” the “other”. His direction within the visual arts was galvanized as a student at the Ontario College of Art where being exposed to and engaged with a diverse perspective of life, ideologies and creative individuals directed his work in a “humanist” direction.

Paul Shilling’s home and studio is located in Washago, Ontario.

Ted Fullerton home and studio is in lower Simcoe County, Ontario.
​
Insight into the works
​After Paul Shilling and Ted Fullerton had completed their paintings – a dialogue in image - they met to discuss and reflect on the work and the experience. They sat outside at Paul’s home on the deck within a beautiful bucolic setting of trees. It was an overcast but warm day in early spring, the month of May and the 2 pairs of paintings where placed side by side.  Paul pulled up two comfortable chairs beside each other. As the two artists sat in silence and within engaged conversation with explanations into the paintings, a cup of coffee in hand, a chipmunk and squirrel clamored up and about Paul’s legs, looking up at him trustingly yet they peered at Ted cautiously.  It was interesting; without each artist having seen what the other would “say” or how they would respond, that reflection and realization within image brought respect, trust and insight into their own truth and that for “the other”. They discussed and concluded, what was being said within the painted conversation should also be said in words and in public no matter how difficult the social situation presents itself in life.

It was suggested by Paul that a written statement of insight into the imagery would be important to allow additional access to their visual conversation. It was agreed and understood that preconceived, culturally directed and set notions of visual images can be misunderstood without considering the breadth of their implied “meaning.”

Ted to Paul: Dialogue in Image
Within my painting Ted to Paul color and image have a dualistic intent. The serpent within Judeo/Christian theology takes on the symbolic inference of deceit and the fall of man, yet within other cultural considerations it is emblematic of healing, fertility, life and the Axis Mundi, that point of truth and understanding that words are unable to express. It is that point of in-between where the mystical and life experience may coexist. A common stereotypical Hollywood western saying is “the white man speaks with a fork tongue”. This is an aspect of consideration within this symbol, however the serpents tongue is gone, removed but its tail is erect perhaps implying white male deceit? Supporting this dualistic image is the color red as it also surrounds the hidden hands clasped behind the figures back. Red can be emotionally experienced as love and affection but it is also experience as deceit, aggression and hate. Counter positioned to the hands hidden, placed behind the figures back, facing outward the figures hands are up front in an offering of new possibilities suggested by the three leaves of new growth - body, mind and spirit - just as the legs of the figure are sprouting leaves - of being grounded in a “new season.” The color blue -water and yellow –“nature” is intended to imply enlightenment and truth in its association to environment as the Hummingbird flies into frame as cautionary hope. The red tonal color placed behind the figure is to signify what has hopefully passed. Although this color expressively placed behind the figure is an engaging color, I have not used it for years deliberately until this painting. In fact I have many tubes of it unopened in my studio choosing not to engage with it in my work. However, it was intentionally used here, placed behind and at the back of the figure, to position it in the past. The intent of my decision was not to ignore this colors unique beauty but to reject or turn my back to its “color name” as demeaning and degrading….Indian Red.

Ted in Response to Paul:

I quickly came to realize that the paired paintings could not exist as a diptych but simply as two independent statements in correspondence with each other. However the symbolic association of color and image as well as the iconography in Paul’s painting did and had to play a major part in my response. I wanted the oval blue shape that was placed over the two intersected heads to take on an archetypal inference of a cave/womb, an image of passage. Blue also symbolizes knowledge. However the two heads are peering in opposite directions. Is the bottom head gazing to the past in its realization of transgressions or refuting the forward looking head above? One of the heads has a white face and the other a black face. In western culture these colors represent positive and negative associations. However, in alchemic philosophy, white and black signify the light moving into the darkness to allow new life possibilities and beginnings. The equilateral crosses that is surmounted and placed on both heads are red and green. As previously indicated, red can represent love and affection but also hate and transgression. Green can also be experienced as a positive and life affirming but it is also gangrenous and represents envy, a negative. The standing figure positioned at the bottom left of the painting has its arms at its side as well as reaching forward, a suggested gesture of honestly and action towards Paul’s painted statement. The inverted archetypal dome over the upper torso of the figure is emblematic, like the blue dome at the top of the painting of a point of passage, to a new beginning.
Statements 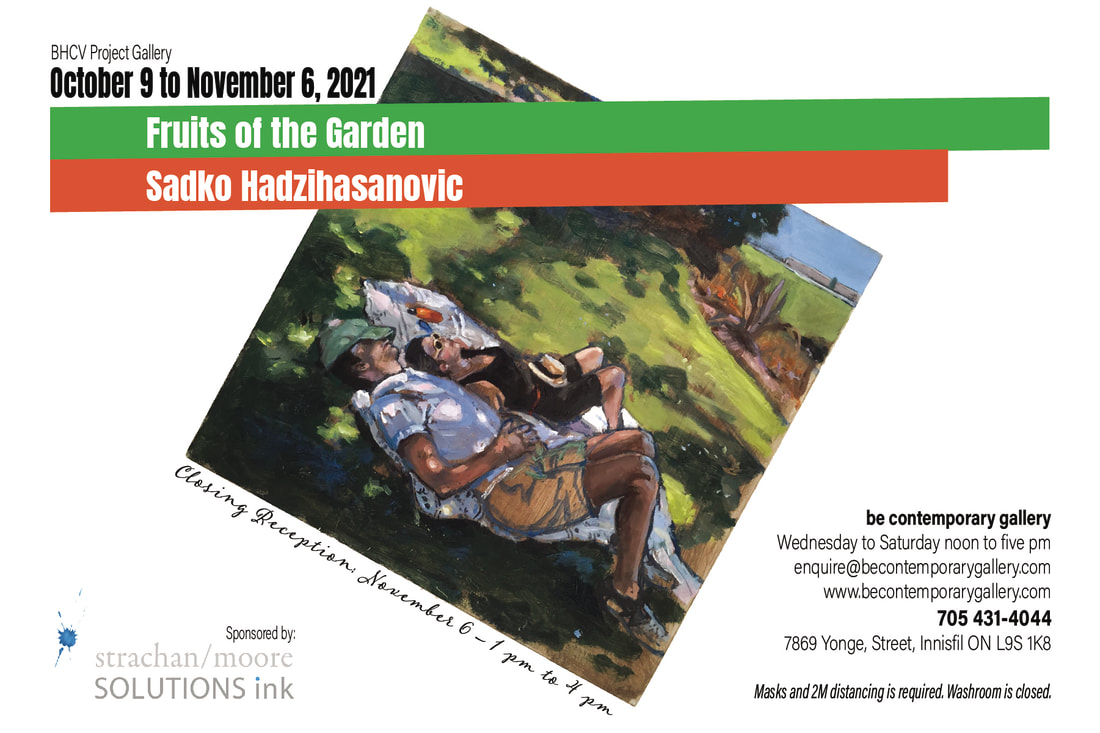 The Fruits of The Garden
During Global Pandemic our lives shifted in an unpredictable ways. We had to reimagine who we are as society and who we are in our personal lives. Being overwhelmed became our constant. In a search for some piece most people started going to the nature seeking refuge from everyday brutality of bad news.

The Idea for this show came from the Andre Gide’s book “Fruits of The Earth. The book is a hymn to the pleasures of the life and explores sight, smell, taste , hearing…All the things Andre Gide almost lost suffering from tuberculosis.

Back to my experience of Pandemic I too was able to reconnect with what nature offers us and to reestablish my place in it.

My paintings are kind of Arcadia of modern times. Very much a part of being with family and friends outside, by the lake, in the shadows, among the birds and just watching the nature changing its colours became an everyday must and a meditation of some kind. The being one with nature gave us perspective and strength so much needed in this unprecedented times in our personal history. I painted shadow plays and people in the gardens in hope we find new modus operandi for a more sustainable life on this planet. Sadko Hadzihasanovic
UA-214606348-1